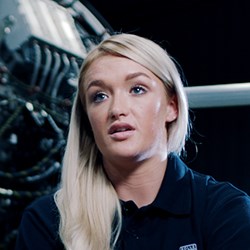 I grew up in Manchester and I left home at 19 to start an engineering degree apprenticeship with Rolls-Royce in Derby. I then became a Production Manager, responsible for the team that strips down and rebuilds aircraft engines, helping make flying safe for thousands of people. My hero is Beyoncé, who I admire for her work ethic.

I was scared of flying until I went to space camp in Alabama and fell in love with engineering. My experience there with flight jet simulators and replica space shuttles helped me to understand flight, so I wasn’t scared, and I wanted to learn more.

I switched my focus from law to join Rolls-Royce on the engineering apprenticeship scheme and now have an MSc in Engineering Business Management. As part of my apprenticeship I worked on building nuclear submarines and aircraft engines in Derby. I then led a large team of fitters and inspectors, taking aircraft engines apart and fixing them. I got to see huge aircraft engines - the ones that might take people on holiday - and understand how they work. In five years, I’d like to have learned from the best and be running my own factory.